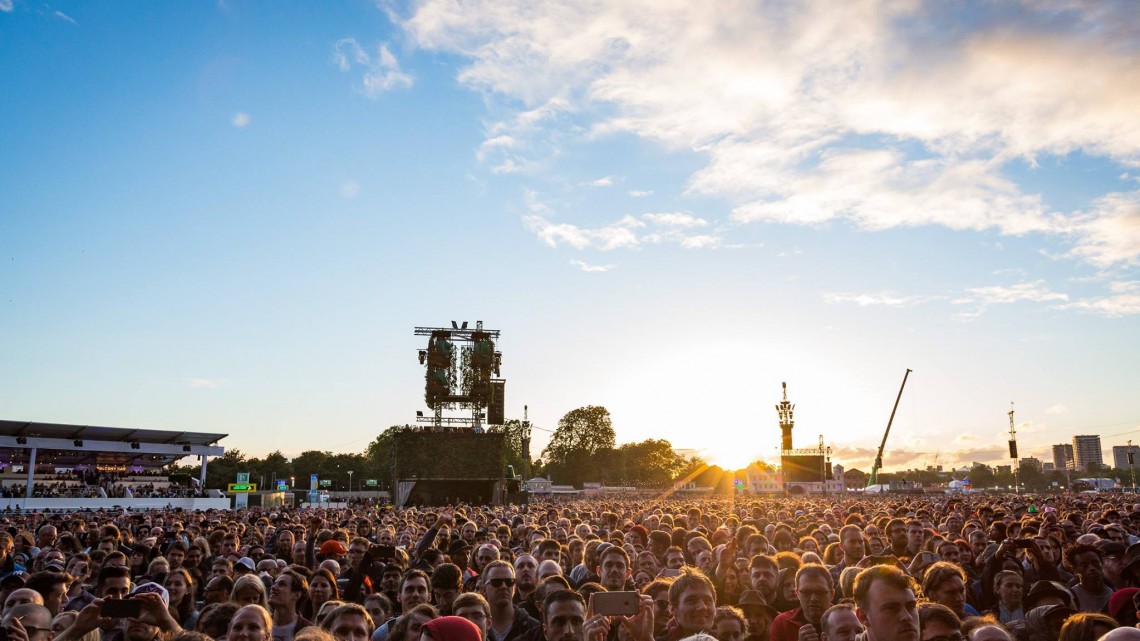 This year is no exception with the likes of Take That, Florence and the Machine, Mumford and Sons, Stevie Wonder and Carole King all gracing the Great Oak Stage. But we were honored to get a chance to cover the launch day with one of the biggest electronic acts in music history headlining – the incredible Massive Attack. As always with BST no expense has been spared putting on what has to be one of the most impressive music events in London. Unlike other similar styled festivals, the site itself is decked out with an impressive array of eateries. This year is impressive in particular with BST’s own Street Food Market. Forget your burger vans, there’s a wealth on offer including delicious Po-Boy’s, Pizza, Italian Cuisine, Mexican Cuisine and much much more. We were particularly impressed with the fantastic Po Boys and Buttermilk Chicken, reflected in their epic queues!

On top of which it’s great to see craft ale on offer too. A nice addition alongside the BST bars which as always have been lovingly styled in an impressive range of styles. Varying from Mexicana tavernas, right through to quaint village pubs. It’s a great concept and one which makes grabbing a drink all the more enjoyable. It’s also great to see additional entertainment on offer from the Playstation Stage and plans to include a Coca Film area to enjoy classic movies. Giving a break away from the crowds.

But clearly BST is all about the music and their launch day doesn’t disappoint – with the likes of  Young Fathers, Patti Smith, TV on The Radio, War Paint, Ghostpoet, Loyle Carner, Shura, Balthazar all playing prior to the legendary ‘Attack’ there’s a wealth on offer here. Ghost poet attracts an impressive crowd alongside the well loved Patti Smith. Who arguably performs. We were particularly impressed with War Paint’s stunning performance. Gathering a huge crowd ahead of the headliners the band have already been turning plenty of heads and no doubt 2016 is destined to be their year. As headliners though Massive Attack are as ever the seasoned professionals. The tempo is noticeably more relaxed though the mood of their set is as edgy as ever. As always the visuals are suitably political, made all the more relevant with the recent chaos of the EU and Brexit. 3D is back on amazing form, spinning through countless beloved lyrics effortlessly with band mate Big Daddy G. Inertia Creeps, Angel and Safe From Harm all go down to a rapturous applause. It’s also great to see the band joined by Young Fathers running through renditions of the newer single Voodoo In My Blood. The crowd are also particularly enthusiastic to see Tricky take to the stage for a version of ‘Take you There’, who’s clearly been enjoying himself far too much prior to the performance.

The collective’s encore of Unfinished Sympathy goes down an absolute storm as always. All in needless to say it’s a more down tempo M.A. set than their usual fare. But with a mix of adoring Massive Attack fans, and a younger audience who arguably don’t know the band so well it’s still good to see them turning new heads.

If you haven’t already get your tickets for BST Hyde Park’s other outstanding events at http://www.bst-hydepark.com/